As of October 1, the Government of Alberta moved away from the province’s single 10 per cent income tax rate to a system of five tax brackets with a top marginal rate of 15 per cent. While the increased rates will likely generate additional revenue, it will most likely be less than anticipated.

For instance, people can decide to work less, accept more tax-friendly fringe benefits rather than additional taxable salary, channel income through a small business, or simply move their income to another jurisdiction with lower tax rates. This means the additional revenue generated by tax increases can be less than expected if the government hasn’t accounted for those behavioural changes.

In a recent study, we calculated the amount of revenue the government can expect under two scenarios: one where behavioural changes are accounted for (dynamic) and one where they are not (static). If the government is budgeting based on a static model, the difference between the static and dynamic models will represent an unexpected revenue shortfall that could perpetuate the province’s ongoing deficits. 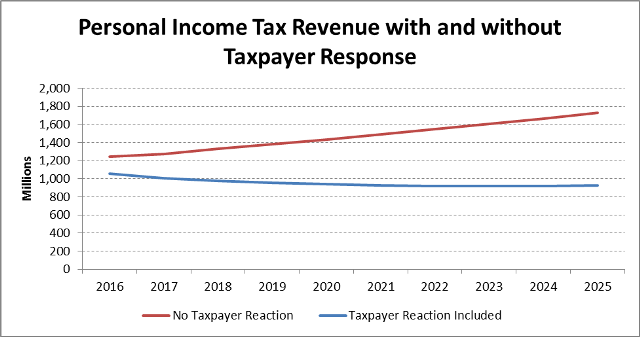 If the Alberta government’s fiscal plan relies on the overly optimistic static estimates, it could add $1.7 billion more than it expects of extra debt during its mandate.

This would worsen the province’s fiscal situation.