Earlier in the year, residents in Metro Vancouver voted against a $250 million sales tax increase to help fund a $7.5 billion new capital expansion plan for the region (mostly for public transit projects). The “no” side received 62 per cent of the votes. Since then, the region’s mayors have looked for other ways to pay for their portion of the plan (the provincial and federal government will pay the rest).

B.C. Premier Christy Clark recently said that another plebiscite would be required if Metro Vancouver municipal governments want to fund the capital plan with a new tax. That would include establishing new tolls on roads and bridges—an idea that’s being discussed. Road pricing may have merit as a way to discourage traffic congestion and better match costs and benefits, but the broader issue is why exactly do municipalities need a new funding source in the first place?

As we argued in a paper last March, municipal governments should first scrutinize existing budgets to find the money they purport to need, particularly considering the dramatic increase in municipal and TransLink spending over the last decade.

Since the debate about funding sources remains an ongoing issue among the mayors, it’s worthwhile repeating the main findings of that paper.

From 2003 to 2013, as noted in the chart below, Metro Vancouver municipalities collectively increased their spending on day-to-day operations by a total of 73 per cent. TransLink’s spending growth was even more dramatic at 105 per cent. with spending more than doubling over the same period. By comparison, the federal (46 per cent) and provincial government (43 per cent) increased spending more modestly over the same period. The increases in collective municipal and TransLink spending also greatly outpaced the combined rate of inflation and population growth (31 per cent) in the region. 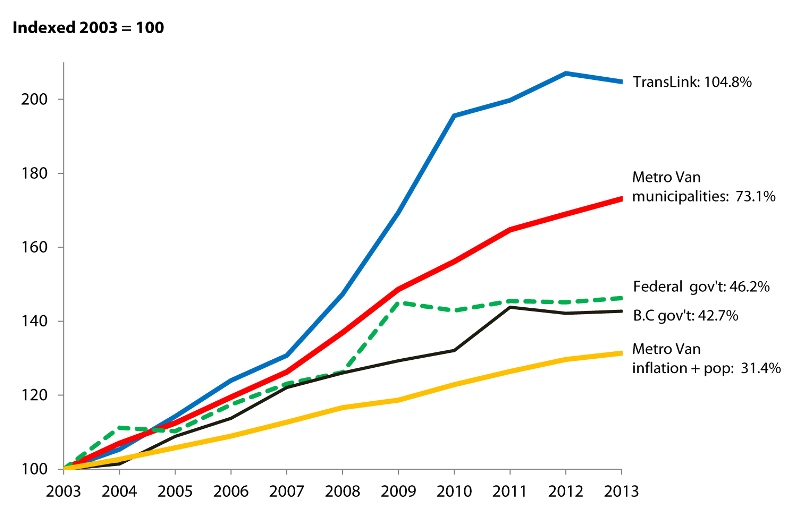 Given this growth in spending, it’s hard to see why municipal governments wouldn’t be able to find savings in their current spending envelops. Consider how TransLink and the Metro Vancouver municipalities could work together to find the $250 million in savings that municipal mayors say they need each year to help fund the proposed capital plan.

Assuming they share the burden based on their proportional operating spending in 2013, municipal governments would have to collectively save $185.6 million while TransLink would have to save $64.4 million (roughly five per cent of operating spending in both cases). Even with these savings, Metro Vancouver municipal and TransLink spending would still have grown faster than the federal and provincial government as well as the rate of inflation plus population growth.

In fact, had Metro Vancouver municipalities restrained spending growth to keep pace with inflation and population growth starting in 2003, they would have spent $4.7 billion less on their operating budgets over the ensuing decade (in 2013 dollars). That translates to a whopping $778 million less spending in 2013, which is more than three times the $250 million figure.

The results of the plebiscite sent a strong signal to municipal governments and TransLink that Metro Vancouver residents do not support higher taxes to pay for expanded transit. Instead of going back to the public with yet another tax increase option, municipal governments could look for savings in their existing budgets.