Energy poverty widespread in Atlantic Canada, with no end in sight

There’s an old saying, that “when you’re in a hole, you should stop digging.” But on Aug. 9, the premiers of Atlantic Canada picked up their shovels with federal Environment Minister Katherine McKenna to plan the region’s energy future. Things discussed included the building of a “clean electricity future,” and a “national price on carbon,” which was described as “impending” in a news article covering the meeting.

Atlantic Canada is a leader in expanding renewable energy. Nova Scotia, for example, has committed itself to producing 25 per cent of its electricity generation with renewables by 2020, and is, according to reports, on a path to meeting that goal. But there’s another area where Atlantic Canada is a strong leader: More households in Atlantic Canada experience energy poverty—a situation where more than 10 per cent of household expenditures are used to pay for energy—than in any other province or region of Canada.

In March of 2016, the Fraser Institute released a study examining what Canadian households pay for energy consumption, both in the home and on the road. The study used data from Statistics Canada to estimate how many households across Canada reach that frequently used benchmark of energy expenditures, and found that on average, 7.9 per cent of Canadian households met or exceeded that benchmark of energy poverty. But the situation becomes even more dreadful when we drill down to Atlantic Canada. 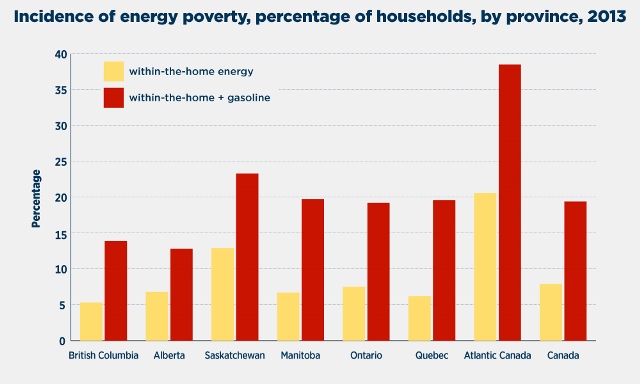 In Atlantic Canada (Newfoundland & Labrador, Prince Edward Island, Nova Scotia and New Brunswick), a stunning 20.6 per cent of households were in energy poverty as of 2013, up from 17.1 per cent in 2010. That’s a 20 per cent increase in only three years.

And that’s only counting energy consumed in the home. If you also factor in the cost of gasoline (an important energy-consumption metric overlooked in most studies of energy poverty), the number reaches an eye-popping 38.5 per cent as of 2013.

Adding more (and more expensive) renewables will not help Atlantic Canadians already burdened with high energy prices and expenditures. Perhaps unintentionally, Margaret Miller, Nova Scotia’s environment minister, acknowledged that the province’s steps to develop more low-carbon energy has landed on the backs of energy consumers. Miller apparently called for credit for Nova Scotia’s steps already taken: “We have wind energy and now we have tidal energy,” she said. “We have a lot of things moving forward that we’re really happy with. Things that really, Nova Scotians have already been paying for through their electricity costs.”

Canadians want clean energy, and Canada has committed itself to stiffen greenhouse gas emission reduction targets. However, how those targets are met, and at what cost, are vitally important questions for the well-being of Canadian households.

Almost 40 per cent of households in Atlantic Canada experience energy poverty. As they move forward with their energy plans, the premiers in the region would do well to focus on opportunities to make energy more affordable for their citizens, rather than taking actions to make it more expensive.