Is the inequality gap growing rapidly in Canada? Hardly

Despite alarmist claims that the inequality gap is growing dramatically, a new Fraser Institute study by economist Christopher Sarlo finds the gap in the living standards of Canadians has barely changed in 40 years.

Specifically, the study finds that consumption inequality—which is the difference in spending on food, housing, and other goods by different households—increased by a paltry 3.4 per cent from 1969 to 2009, the last year of available Statistics Canada data.

The results stand in stark contrast with the impression of a sharply growing gap and increasing polarization in Canada—an impression heightened by reports that mis-measure income inequality.

In fact, when income inequality statistics are properly measured (accounting for taxes and government transfers and adjusting for household size), the study finds income inequality has increased modestly by 11.5 per cent. 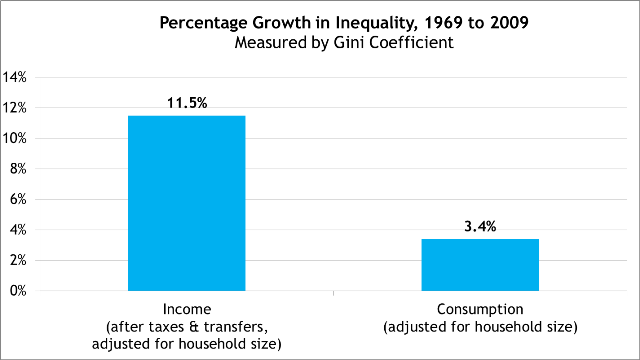 But consumption—compared to income—better reflects the actual economic well-being of Canadians by measuring what people do buy to support a certain standard of living, and not what people could buy, based on their income.

Indeed, people don’t spend all of their income. They use some of it to save, pay down debt, or gift to others. As the study notes, an example of the latter is when parents give money to their children at various stages in life to assist them with education and living expenses. Charitable giving is another example.

Consumption is also superior to income because it’s more stable over time whereas income can be quite volatile. For example, when people start a new business, take maternity leave, switch jobs or even lose their job, their income drops. But during those times, people borrow, receive assistance from family, or draw down savings to maintain their standard of living, before their income levels rise again. This reality is not accounted for in measures of income inequality.

Finally, consumption data is likely more accurate than income data, which tends to be under-reported, particularly for those at the bottom of the income distribution. Using reported income data in surveys, for example, can thus overstate measured inequality. As Sarlo notes, “while reported consumption is not perfect… there is not the same underlying motivation to understate consumption.”

Bottom line: reports that mis-measure income inequality leave a mistaken impression that the gap in living standards between Canadians is growing rapidly and we’re becoming much more economically divided. That’s simply not the case.