Ontarians have experienced significant economic pain since the Great Recession. While the provincewide economy has recovered to an extent, job growth in Ontario has been below the national average since 2008. Furthermore, many regions have been left behind. Ontario is a large province with 23 distinct urban areas, yet the overwhelming majority of net job-creation has been clustered in two Census Metropolitan Areas (CMAS)—Toronto and Ottawa.

To illustrate how lopsided the recovery has been, let’s look at the share of net job-creation in the Toronto and Ottawa CMAs.

Total employment in the Toronto CMA increased by 12.2 per cent and 6.9 per cent in Ottawa over that period, compared to the national average of 6.3 per cent. The provincial economy as a whole saw a 5.9 per cent increase in total jobs, though that total is heavily influenced by the contributions of the Toronto and Ottawa CMAs. 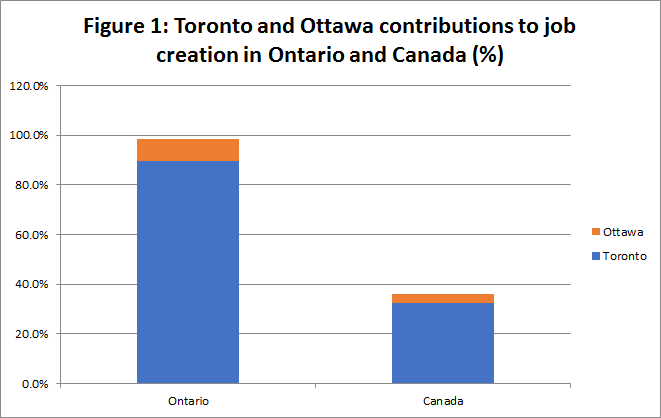 So even though the total number of jobs in Ontario is now higher than it was in 2008, large swaths of the province still have not recovered from the recession, let alone grown.