It's widely known that Ontario has suffered more than its fair share of economic pain over the past decade. That pain, however, has not been spread evenly across the province. While the provincial economy’s overall performance has been lackluster, in many regions of the province labour market performance and job-creation have been even worse than provincewide statistics suggest One way to measure this is the change in total employment between 2008 and 2016 in Ontario’s Census Metropolitan Areas (CMAs) and Census Agglomerations (CAs), as seen in the chart below. 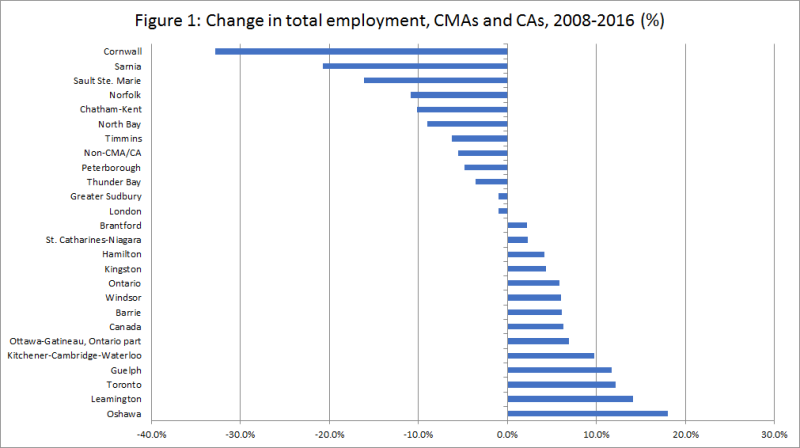 Clearly, there’s substantial variation in the rate of job-creation across Ontario’s urban areas—ranging from 18 per cent growth in Oshawa to a 33 per cent decline in Cornwall. In aggregate, the largest urban centres (CMAs) saw a 7 per cent increase in total employment between 2008 and 2016, while employment in smaller CAs fell to 86 per cent of their 2008 level and non-CMA/CAs saw their totals fall slightly to just under 95 per cent of their 2008 levels by 2016.

This means that for the most part, larger urban centres have experienced more job-creation than smaller urban (and non-urban) centres in the province.

Although a handful of urban areas have performed well with job-creation, the chart shows that they are a small minority. Just six of Ontario’s CMA/CAs have seen job-creation above the national average since 2008 and nearly half (11 out of 23) have experienced negative net job-creation during this time.

Undoubtedly, while the provincial economy as a whole has slowly rebounded, the majority of Ontario’s municipalities have struggled since 2008 with either negative or only very slightly positive rates of job-creation. Much better performance in a small number of very large jurisdictions, especially Toronto, pulls the provincial average up closer to the national average. However, these data show that looking at provincial level metrics alone likely provides distorted view of the experience of residents in many Ontario towns and cities, which have suffered significantly worse economic outcomes since 2008 than one might think by looking only at provincial averages.