Ontario debt—kicking the can down the road

A new study released this today by the Fraser Institute examined the Wynne government’s plan to reduce Ontario’s debt burden to pre-recession levels (26-27 per cent) by 2029/30 from its current level of 37.5 per cent.

The government’s plan has a number of shortcomings. Most importantly, it does not stop adding new debt in the years to come. Not surprisingly, this will make it difficult—if not impossible—to make meaningful progress in reducing Ontario’s debt-to-GDP ratio in the near term.

Consider the fact that despite a balanced operating budget, over the next three fiscal years, the Wynne government expects to add, on average, $11.4 billion in new debt to its books each year due to debt-financed capital spending. That’s roughly the same pace of debt accumulation in Ontario over the past three years, which averaged $11.6 billion annually.

Because of all this new debt, the government concedes it will make almost no progress in reducing the debt-to-GDP ratio over the next three years. In fact, its own budget expects the ratio to shrink by just 0.2 percentage points annually over this period. At this rate, it will take decades for the government to achieve the 27 per cent target. 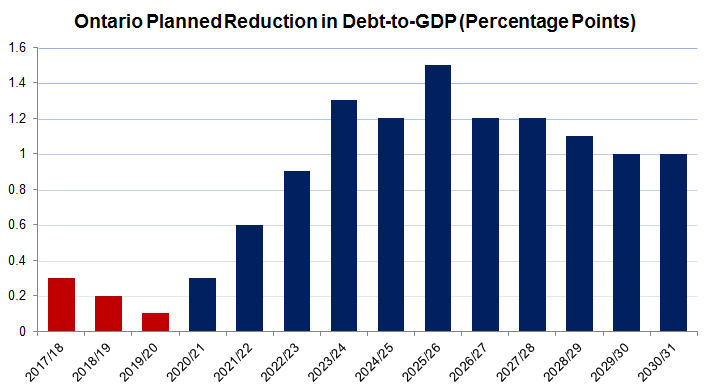 As shown above, the government leaves most of the significant reductions well into the future. The plan does not call for annual reductions in debt-to-GDP of more than one percentage point until 2023/24.

Especially since any number of developments could derail the government’s plan. An economic slowdown or recession, for instance, would make the government’s distant projections of debt burden reduction much less likely.

In short, the government’s track record of adding substantial debt every year, and its plan to continue doing so for the next three years, makes the promise that this trend will finally change in about six years hard to accept.

Instead of committing to immediate and meaningful reductions to its debt-to-GDP ratio, the government has opted to continue its borrowing in the short-term and delay any significant reductions to its debt burden until the mid-to late-2020s. The resulting plan lacks urgency and credibility, as it delays action into the distant future and relies largely on shaky promises.