Ontario not likely to balance its books on schedule

In a recent column we spotlighted a new report from Ontario’s Financial Accountability Office (FAO), which sounded alarm bells about the likelihood of the government delivering on its commitment to balance the books by 2017/18.

Our column focused on two primary risks to the government’s plan to eliminate the deficit in two years, including overly optimistic revenue projections and vagueness about how the government will markedly slow down the rate of spending growth between now and 2017/18.

But the FAO report pointed to another, perhaps more straightforward, reason to be skeptical that the government will balance its books on schedule. Put simply, its recent deficit reduction track record is quite weak, which is why Ontario is still running an $8.5 billion deficit in 2015/16, several years after the recent recession.

The FAO report notes that between 2010/11 and 2014/15, the Ontario government reduced the deficit by an average of just $0.9 billion each year. In the very most recent years, the province’s performance has been even worse.

To achieve balance by 2017/18, the government plans to reduce the deficit by an average of $3.4 billion annually going forward. In other words, it plans to reduce the deficit nearly four times faster over the next three years than it has over the past four years. The graphic below from the FAO report shows Ontario’s deficit reduction record in recent years, as well as the dramatic acceleration that would be required to achieve balance on schedule. 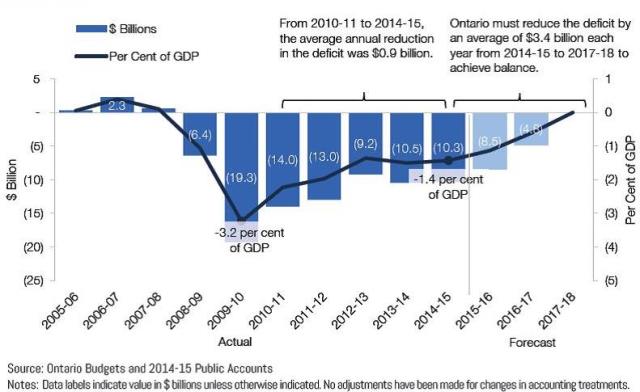 Of course, it is entirely possible for the government to accelerate the rate of improvement to the fiscal balance and eliminate the deficit by 2017/18 as promised. However, doing so will require a different approach to fiscal policy than the government has practiced in recent years. The existing strategy has not proved capable of improving the province’s fiscal balance at the rate required to meet this target.

If the government is truly serious about changing course and meeting the 2017/18 target, it should outline a detailed plan for reforming and reducing spending, showing exactly how it will restrain spending and accelerate the pace of deficit reduction.