Avoiding deficits during an oil boom should be a relatively straightforward proposition for governments in oil-rich jurisdictions. Unfortunately, that hasn’t been the case in Alberta.

A recent Fraser Institute study compared how Alberta and fellow oil-producing jurisdiction Texas managed their public finances in recent years. The study shows that both jurisdictions enjoyed a prolonged period that can generally be characterized as an economic boom from 2004 to 2014 with economic growth rates significantly exceeding their respective national averages.

Despite this robust growth and high energy prices in most years, Alberta still proved unable to consistently balance its budget in the later years of the boom. The province started running deficits in 2008/09 when commodity prices were falling. However, it’s important to note that the province continued to run budget deficits in the years following the recession long after energy prices recovered. In fact, Alberta has run a nearly uninterrupted string of deficits since 2008/09, despite oil prices being historically high most of those years.

Texas’ fiscal record stands in stark contrast. That state also ran budget deficits during the depths of the 2008/09 recession, but quickly returned to balance in the following years. In fact, Texas ran five straight surpluses in the final five years examined in our study (see chart below). 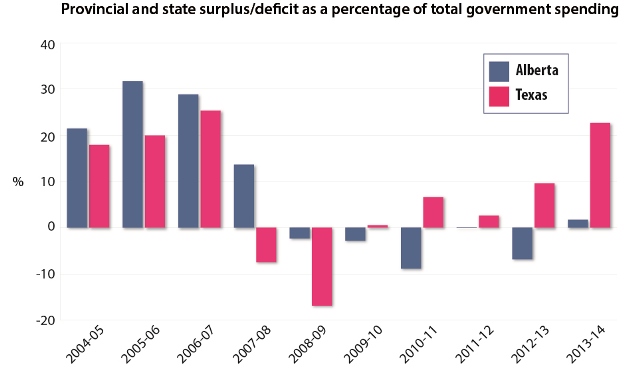 Both Alberta and Texas enjoyed generally strong economic performance between 2004 and 2014, with the exception of the downturn in 2009 caused by the global financial crisis. But Texas for the most part ran surpluses whereas Alberta has consistently run deficits in recent years even when oil prices were high. So why the difference?

One notable difference between the two jurisdictions is the rate of program spending growth in recent years. Whereas inflation-adjusted per-capita spending in Texas increased by 37.3 per cent from 2004-2014, it increased much faster (by 49 per cent) in Alberta during the same period. Alberta’s faster rate of spending growth is an important contributing factor to the fiscal problems facing the province today.

The different fiscal outcomes in Texas and Alberta highlight the fact that the province’s chronic deficits have been the result of spending choices, rather than drops in commodity markets.