The decline of the 1% in Canada 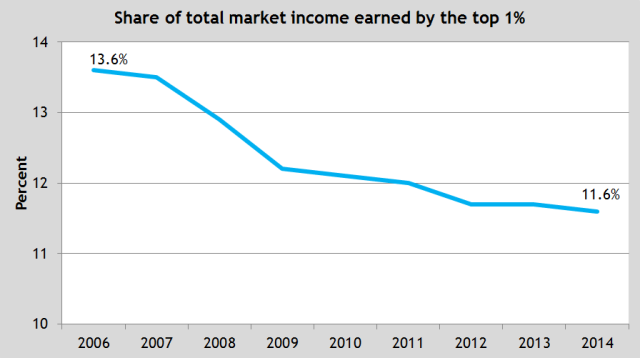 This is completely at odds with much of the prevailing rhetoric, which is used to argue for economically damaging government policies such as higher taxes on highly skilled, educated workers. For instance, the federal government’s new top personal income tax rate of 33 per cent was recently introduced in part as a response to the perception that a greater share of income is going to the one per cent. Same goes for many provincial increases in their top rate.

For example, in 2014 the Ontario government added a new provincial top tax rate of 20.5 per cent. Combining this with the new federal top rate has resulted in a combined top personal income tax rate of 53.5 per cent. This rate is the seventh highest among 34 industrial countries and the highest among English-speaking countries.

Given the economic costs that come with a higher top tax rate, it’s unfortunate that increasing the top tax rate is partly motivated by the misperception that the top one per cent’s share of total income is rising. Government policy should be based on facts—not on false perceptions.