Yesterday Prime Minister Trudeau changed his tune—for the time being, at least—on electoral reform, telling his newly appointed minister handling the issue, that “changing the electoral system will not be in your mandate."

The prime minister, who promised electoral reform during the 2015 campaign, justified the change by saying that “a clear preference for a new electoral system, let alone a consensus, has not emerged. Furthermore, without a clear preference or a clear question, a referendum would not be in Canada’s interest.”

Changing the electoral system was always going to be more complicated than the promise made by the Liberals while campaigning. The first complication was whether the public should decide in a referendum—and it should have, had the government moved forward with electoral reform. Moreover, to make an informed decision about the fundamental issue of how we select our political representatives, Canadians must fully understand all the benefits and drawbacks to competing electoral systems.

Although they are not often discussed, there are a number of benefits to our current first-past-the-post system including the incentive for parties to offer broad platforms in order to entice enough constituents to cast votes for them. This is in contrast to a proportional representation (PR) system, where the likelihood of smaller and even fringe parties gaining representation is much greater.

Which leads to one of the main drawbacks of PR systems—when more parties are elected to the legislature, we see more coalition governments. To form coalitions, larger parties must gain the support of smaller parties, often by capitulating on key issues. This produces another problem—higher levels of government spending and larger deficits.

For example, a recent study found that, from 2000 to 2014, the average size of central governments in countries with PR was almost 25 per cent larger than in countries with majoritarian/plurality election rules, similar to what Canada currently employs (see chart below). The study also found that PR countries tend to finance this extra spending by running larger deficits. 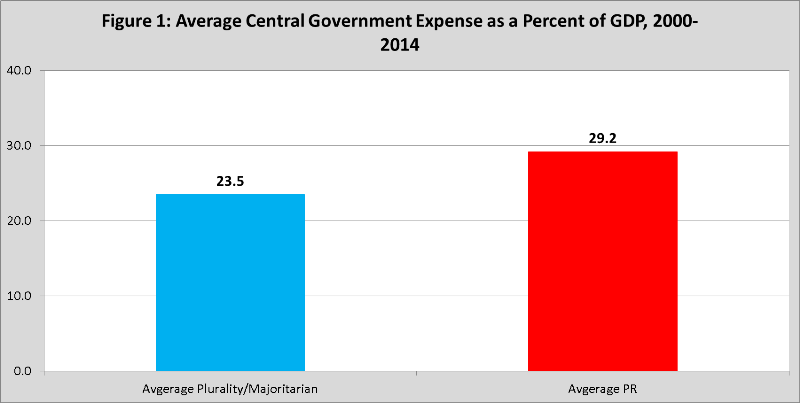 Other potential replacement electoral systems have drawbacks as well. Consider the alternative vote, which is the prime minister’s preference. This system would reduce the competitiveness of elections—a key attribute of healthy, functioning democracies.

In a recent study, we estimated the results of the seven Canadian federal elections between 1997 and 2015 using alternative vote electoral rules.

The study also found that AV electoral rules would have changed the outcomes in a number of elections, including leading to a different party (the Liberals) winning in 2006.

A hasty change to our electoral system was not going to benefit Canadians. At the very least, it will take time for Canadians to understand all the costs and benefits of changing the way we vote for our political representatives. So while the federal government caused this uproar by hastily committing to changing the electoral system, it has clearly recognized the folly of its decision and walked away from an ill-conceived campaign promise.