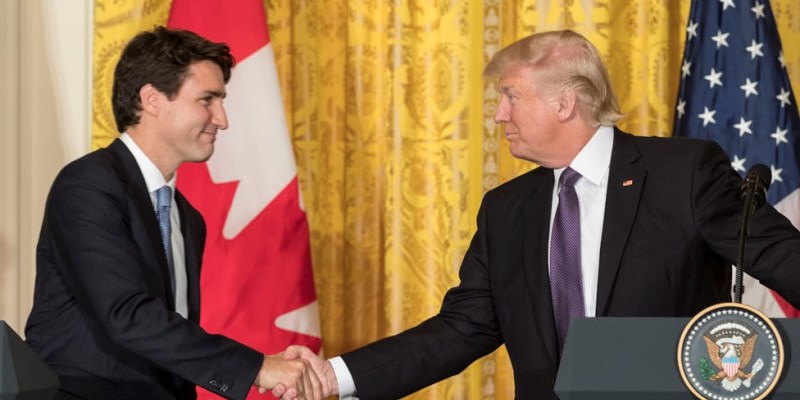 Canadians owe Donald Trump a debt of gratitude for repeatedly referring to our average 270 per cent tariffs on dairy products coming into—or trying to come into—this country. For many Canadians, that’s probably the first they’ve heard of supply management, the legalized cartels we established in the early 1970s because our dairy and poultry farmers couldn’t abide competition from other provinces.

We’re also in his debt for pointing out that we Canadians face low personal exemptions, albeit not as low as they once were, on bringing goods back with us tariff-free after personal trips to the United States. His description of how we scuff new shoes so as to fool the customs inspectors into thinking they’re not new was very colourful but (honest now), for most of us it rang true. Everyone out there who hasn’t fibbed on his or customs declaration, step right up for special commendation. (That President Trump attributed our smuggling goods to high tariffs rather than low personal allowances doesn’t help with tariff negotiations, but this is one fact he got at least partly right.)

But we’re not the only country that interferes with trade. If our prime minister wanted to tweet back accusations, which probably wouldn’t be a good diplomatic strategy with this president, he’d have no shortage of ammunition.

For instance, the OECD calculates what it calls a “services trade restrictiveness index” (STRI) that tries to put a zero-one number on different countries’ interference in free trade in services, which constitute the fastest-growing component of international trade. Services are actually an area where the U.S. does very well, exporting US$752 billion in 2016 against imports of US$505 billion. (I’m reluctant to use the adjective “well” in referring to trade in which the U.S. has a surplus of exports over imports since that subliminally supports the notion of “Surplus Good, Deficit Bad,” which most economists dispute, arguing on the contrary that a country’s trade deficit or surplus is what it is. But the belief is so pervasive it’s sometimes hard not to slip into that kind of language.)

If you find the table I linked to bewildering, you can read two-page country summaries here. Each summary comes with a colour-coded chart showing the country’s score in each of 22 service industries, what accounts for it, and how it compares with the average score of all the (mainly rich) countries the OECD looks at.

If you compare our score with the U.S. score in each of the 22 industries, the results also favour us. There are two industries where the two countries have essentially the same score (sound recording and computers). In the other 20 industries, the U.S. has the lower (i.e. better) score in just seven of the 20 while we have the lower score in 13—which if you’re counting, Mr. President, is almost twice as many.

If you take an average across all 22 industries (which you probably shouldn’t do, at least not without weighting the industries by importance, which I haven’t done here) our average is 0.225 and the Americans’ is 0.232. We do better again. Just sayin’.

True, the U.S. has the single lowest score among all the industries across the two countries—just 0.124 in telecoms. (Our telecoms score is 0.333, which probably helps account for our telecoms prices. Our lowest STRI is 0.152 in road freight transport.) But the U.S. also has the highest STRI, 0.534 in air transport, where the main problem, the OECD’s country note informs us, involves restrictions on foreign ownership of airlines. The infamous Jones Act, which restricts port-to-port maritime shipping to U.S. carriers, produces a high score of 0.371. Our score in air transport is also high—0.401, our highest score for the 22 industries. Our score in maritime transport is just 0.190.

In sum, this is an index where Canada does better than the U.S. According to the OECD’s numbers, we’re less trade-restrictive in services than they are.

I wouldn’t expect the White House to take these numbers lying down, if ever they came to its attention. Anyone who has tried to put an index together understands there are almost infinitely many ways to do it. Moreover, many of the restrictions the OECD is trying to measure don’t readily lend themselves to numerical capture. But these numbers are better than no numbers. And they’re by no means fake numbers. Which means that if the U.S. wants to get to pure free trade, as the president says it does, it has work to do, too.

Best we lower the volume and all get on with it.