For years now, politicians and pundits have been peddling a pessimistic view that Canadian middle-class families are stagnating economically or even falling behind. Fortunately, this gloomy view is not true. Here are three key reasons, based on research from our recent study, that show middle-class Canadians are doing better today than in decades past.

1) Middle-class income is up dramatically

From 1976 to 2011 (the latest year of readily available data), median income in Canada has increased by 52 per cent. This dramatic growth is likely surprising given the doom and gloom stories of stagnation and decline. However, those claims are based on either flawed or incomplete analyses that often fail to properly adjust incomes for changes in taxes and government transfers (the GST credit, child benefit payments, etc.). They also overestimate the effects of inflation, and they don’t account for the fact that the typical family is smaller today than in the past, meaning a family’s income is now spread across fewer people. After accounting for all this, median income is up from $25,771 to $39,200 per-family-member (see chart below). 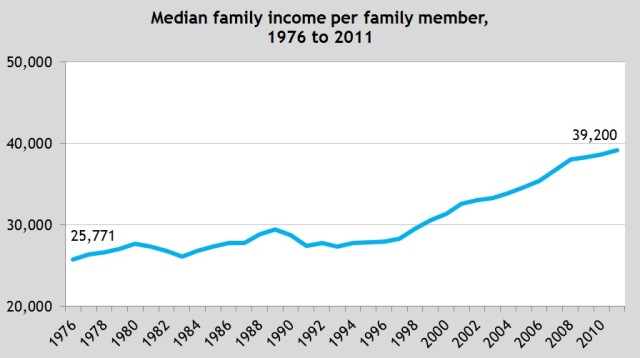 Another indicator that the middle class is better off today is the fact that the average Canadian worker now works a lot fewer hours to purchase common household items. The table below compares a wide variety of typical household goods sold in the Sears Canada catalogue in 1976 to the same (or similar) goods sold in 2011. A Canadian earning the average wage now works fewer hours than in 1976 to earn enough money to buy every item. For example, in 1976, a microwave cost $579.98. Earning the average hourly wage of $5.30, it took the average Canadian 109 hours of work to buy it. Thirty-five years later, a much better microwave (given improvements in technology) sells for $229.99. At the average hourly wage of $23.30 in 2011, that’s only 10 work-hours. Similarly, a colour television in 1976 cost the equivalent of 113 hours of work compared to just 12 work-hours for a much sleeker one with the same screen size in 2011. A fridge in 1976 cost 137 work-hours compared to 22 work-hours in 2011. And the list goes on. 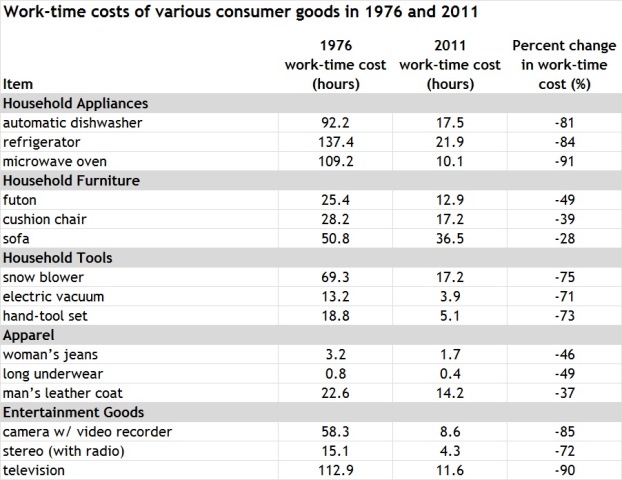 A third reason pointing to considerable economic progress for middle-class Canadians is that basic necessities (housing, food and clothing) take up a smaller percentage of the average family’s income. In 1961, the necessities of life consumed 56 per cent of the average Canadian family’s income (see chart below). Half a century later, necessities now consume just 38 per cent. Although some of the extra room in the family’s budget has been taken up a larger tax bill, spending less on necessities is a sign of economic improvement. 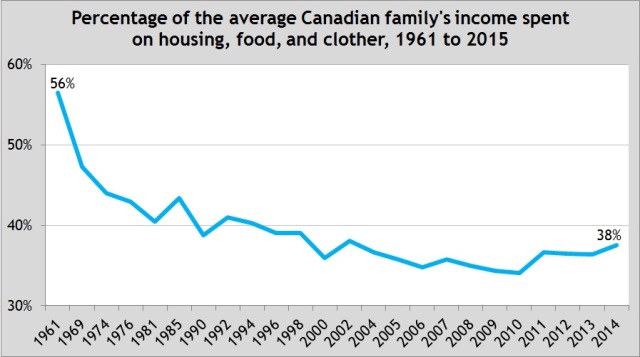