There are good reasons to worry that such a rapid increase in the minimum wage (an increase of more than 30 per cent in less than a year-and-a-half) will have undesirable unintended consequences. Specifically, the evidence suggests that a much higher minimum wage will have a negative effect on job creation in Ontario’s economy, with the effects being heavily concentrated on young less-skilled workers.

Although research from the United States is somewhat mixed, the Canadian evidence consistently shows that minimum wage increases produce adverse effects on employment for young and less-skilled workers.

What’s more, international evidence shows that as the minimum wage climbs higher relative to the median wage in any given jurisdiction, the disemployment effects tend to become worse. On this important metric, Ontario is set to move well out of line with other Canadian provinces and nearby U.S. jurisdictions with whom Ontario competes.

But with increases over the next two years, Ontario’s minimum wage will soar to 64 per cent of the province’s median wage. This will put Ontario well out of line with prevailing Canadian norms. Just how severe the resulting employment losses will be is difficult to predict, because there are so few examples of similarly rapid minimum wage hikes to such a high level in recent North American history. 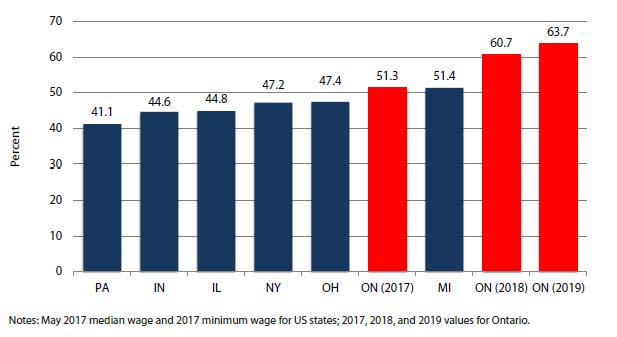 Clearly, with a $15 minimum wage, Ontario is entering largely uncharted waters, which makes the precise effects difficult to predict. However, there are good reasons to be concerned about the effects, especially for younger and less-skilled Ontarians.