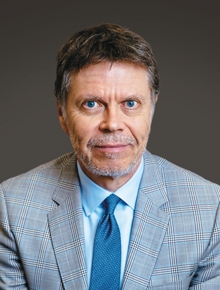 Donald J. Boudreaux is a Professor of Economics and former Economics Department Chair at George Mason University and a Senior Fellow with the Fraser Institute.  He is also a Senior Fellow with the F.A. Hayek Program for Advanced Study in Philosophy, Politics, and Economics at the Mercatus Center at George Mason University, and holds the Martha and Nelson Getchell Chair for the Study of Free Market Capitalism at the Mercatus Center.  He has a Ph.D. in economics from Auburn University and law degree from the University of Virginia.

Professor Boudreaux is committed to making economics more accessible to a wider audience, and he has lectured across the United States, Canada, Latin America, and Europe on a wide variety of topics, including the nature of law, antitrust law and economics, and international trade. He is published in a variety of newspapers and journals, including The Wall Street Journal, The Washington Times, and The Supreme Court Economic Review and writes a blog (with Russell Roberts) called Café Hayek, cafehayek.com.

The Essential James Buchanan spotlights the famed American economist who pioneered the use of economics to understand how decisions are made collectively—particularly in politics.

read more
Towards a Better Understanding of Income Inequality in Canada

Towards a Better Understanding of Income Inequality in Canada is a new book that finds the problem of inequality isn’t nearly as bad in Canada as people are sometimes led to believe. Canadians are more able, thanks to opportunities of mobility, to get out of a low-income situation, middle-class incomes are not stagnating and most people can and do build-up wealth over the course of their lives.

read more
The Myth of Middle-Class Stagnation in Canada

The Myth of Middle-Class Stagnation in Canada finds that Canada’s middle class, instead of stagnating economically, has actually seen its income increase by as much as 52 per cent since 1976, and the average Canadian worker also has to work far fewer hours to afford similar, although vastly improved common household goods such as televisions and cameras.

The purchasing power for the average Canadian wage-earner has increased dramatically since 1976.

The Decline Of The American Entrepreneur
Donald Boudreaux, Jason Clemens
Appeared in Forbes

The United States continues to suffer from a historically weak economic recovery. Monthly GDP and employment numbers remain near anemic. From a historical perspective the economy should be roaring by now given the pronounced contraction in 2008.