Federal Deficits and Recession: What Could Happen 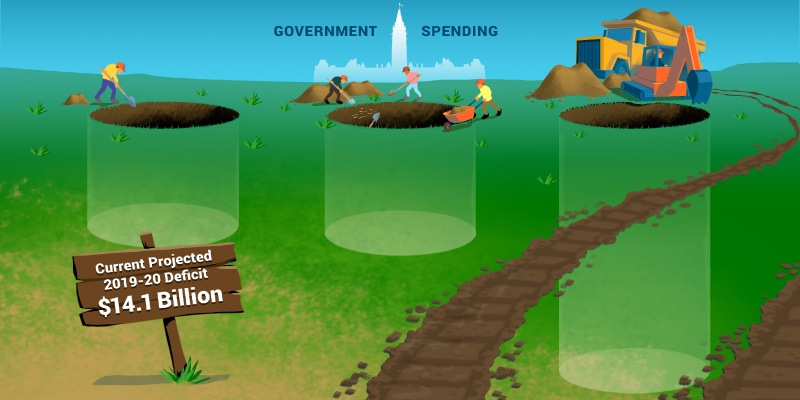 There are serious financial risks associated with running deficits during times of positive economic growth. One of the principal risks is that the budget cannot be balanced regardless of economic conditions because a permanent imbalance between how much the government spends and the amount it raises from taxes and other revenues develops. The Trudeau government took office in late 2015 and immediately increased budgeted federal program spending by $8.1 billion over the period from 2015/16 to 2019/20. Less than six months later, in its first full budget (2016), the federal government markedly increased budgeted program spending by an additional $65.9 billion over the same five-year period. The increases in program spending meant the government purposefully moved from expected small surpluses to large deficits. The original 2015 plan presented by the Harper government was for a cumulative budgeted surplus for the 2015/16–2019/20 period of $13.1 billion.

The Liberal government’s first budget, introduced in early 2016, called for deficits between 2015/16 and 2019/20 totaling $104.3 billion, more than four times higher than originally proposed in their campaign platform. Again, these deficits were planned without an expectation of a recession or economic slowdown during the planning period. This paper estimates the potential annual and four-year cumulative deficits for the federal government if an economic slowdown or recession occurred. It does so by applying the experiences of three previous recessions (1982/83, 1991/92, 2008/09) and an economic slowdown (2000/01) to the current financial plans of the federal government.

Recessions automatically—without any policy changes—cause government revenues to decline and program spending to increase. For instance, the best known of these types of programs is Employment Insurance. During times of recession the revenues collected for EI will decline as people’s income declines or they are laid off. In addition, spending by the EI program automatically increases as more people collect EI benefits. In the most recent 2008/09 recession, spending on employment insurance increased from $14.1 billion in 2006/07 to $21.6 billion in 2009/10, an increase of 53.3%.

Often governments will also enact discretionary measures that further reduce revenues and/or increase program spending in response to recessions. The Harper government, for instance, introduced a large package of stimulus spending in the 2009 budget in response to the 2008/09 recession. The result of both the automatic revenue declines and spending increases coupled with possible discretionary policy changes is larger deficits.

The economic slowdown of 2000/01 had more serious fiscal effects than the 1991/92 recession. If such an experience were repeated, the deficit for 2019/20 is estimated to reach $48.7 billion and the cumulative four-year deficit increases to $287.4 billion (current estimate is $48.5 billion).

Finally, if the conditions of the most recent and fairly serious recession of 2008/09 were repeated, the annual deficit for 2020/21 is expected to reach $120.5 billion. The four-year cumulative deficit is estimated to increase from $48.5 billion to $335.1 billion.

As many commentators, including the authors of this essay have noted, running deficits in times of economic growth, even periods of slow economic growth, risks much larger deficits when the inevitable recession occurs. This essay applies the experiences of three past recessions and an economic slowdown to the federal government’s current finances in order to estimate the possible fiscal effects of the next recession. The resulting decline in revenues and increase in program spending from recessions means much larger deficits and thus an accumulation of debt. The risks to federal finances from even a mild recession, let alone a more severe recession, given the current level of deficits are substantial and should be taken into consideration in future budgets.