Rates of Return for the Canada Pension Plan 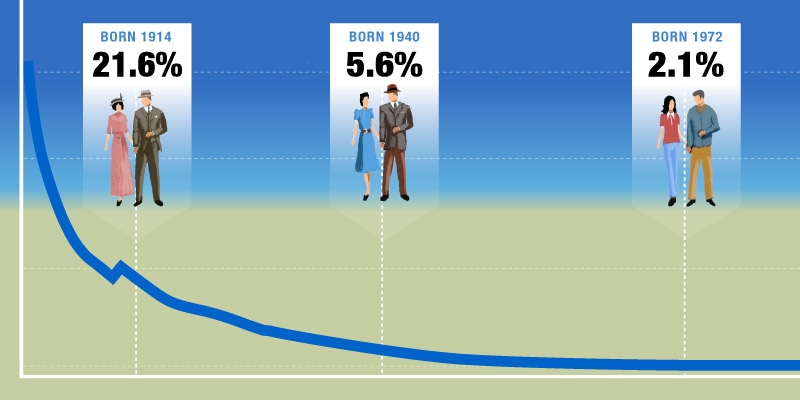 Based on the model employed in this paper (which assumes workers retire at age 65), the real rates of return enjoyed by Canadian workers from their CPP retirement benefits ranged from an incredible 45.5 percent in 1969 to just 3.6 percent in 2015.

The projected real rates of return for the CPP continue to fall to 2.1 percent for those retiring in 2037, stabilizing thereafter. In other words, Canadian workers retiring after 2036 (people born in or after 1972) can expect a real rate of return of 2.1 percent from the CPP.

The rates of return noted above are further reduced if certain assumptions are changed. For example, making maximum contributions over the entire course of one’s working life (ages 18–65)—rather than assuming zero contributions for the first eight years (which are exempted from the retirement benefit calculation), as done in the first set of calculations—reduces the real rate of return to 1.7 percent for workers retiring in 2037 or later (compared to 2.1 percent).

There are two principal reasons for the decline in the rates of return. The first is the difference in the periods of contribution for Canadian workers, particularly in the early years of the CPP. For instance, in the initial years of the plan, only ten years of maximum contributions were required to receive a full CPP benefit. That period is currently 39 years.