CMHC confirms that housing supply is the problem in Vancouver

The Canada Mortgage and Housing Corporation (CMHC) released its quarterly housing market assessments for Canada’s major urban centres, noting that “evidence of problematic conditions” in Vancouver moved from moderate in April to strong in July. While concerns about real estate in Vancouver are nothing new, the CMHC conclusions are refreshingly on point.

Robyn Adamache, a principal market analyst for CMHC, said “we’re seeing moderate evidence of overheating and price acceleration in Vancouver because supply is not keeping pace with demand.” This is consistent with the findings of a recent Fraser Institute study, which found that onerous land-use regulations have led to slower growth of the housing stock in Vancouver than would have otherwise been expected had Vancouver’s regulations been in-line with the regional average.

As the map below indicates, many highly sought-after communities, such as Vancouver’s West Side, have seen less growth than expected, given their location and desirability. 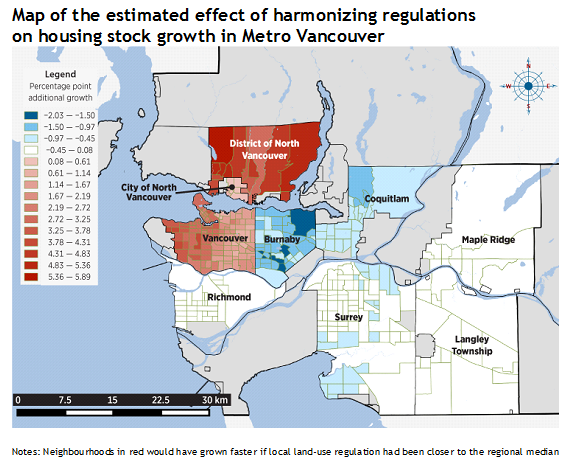 Moreover, the study found that long and uncertain building permit approval timelines are key barriers to building the new units required to meet strong demand—from locals and foreign buyers alike. And although the region’s geography places natural limits on outward growth, there remains plenty of room to build upwards.

The province and municipalities should heed CMHC’s advice and work to reduce barriers to developing new housing in Greater Vancouver. Rather than imposing heavy-handed policies such as the new tax on foreign buyers, moves to allow for more new housing could help calm housing price growth. And changing market expectations overnight by imposing a new tax could have unexpected and jarring consequences for the housing market.

Regardless of whether one thinks the province should intervene directly in the housing market, it’s clear that supply failing to keep up with demand remains a central component of the problem in Vancouver. The province and municipalities should use the levers at their disposal to facilitate development of new housing units.