The federal government plans to change the way Canadians elect their political representatives, and two of the five parties on the parliamentary committee investigating Canada’s options have expressed a preference for proportional representation (PR)—an electoral system which elects representatives based on the proportion of votes each party received.

A change to PR, however, would likely lead to higher government spending.

The reason for this is that PR systems tend to elect more parties to parliament, resulting in fewer majority governments and more coalition governments.

This result can be seen in the table below. From 2000 to 2015, elections in industrialized countries with PR systems resulted in coalition governments 83 per cent of the time. In majoritarian/plurality electoral systems like Canada’s, coalition governments were only the result 15 per cent of the time. PR systems also tended to elect more parties to the legislature, with an average number of effective parliamentary parties of 4.4 compared to 2.2 in plurality/majoritarian systems.

When more parties are elected to the legislature and coalition governments become necessary, the single large party must negotiate with smaller parties and often yield on key policy issues, leading to higher levels of government spending.

The chart below presents data from our recent study where we examined the average level of central government spending over a 15-year period, between the years 2000 and 2014, in advanced industrial countries. We found that countries with PR electoral systems had average central government spending of 29.2 per cent of the economy (GDP) compared to 23.5 per cent for countries with majoritarian/plurality election rules. 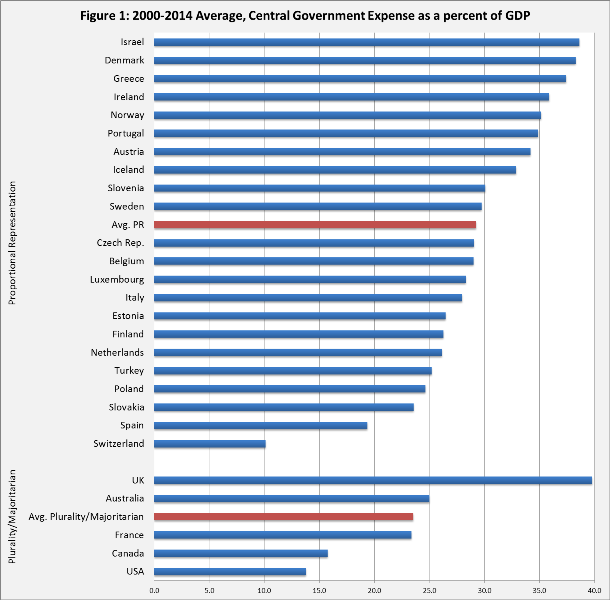 A number of other academic studies have also reached similar conclusions. For example, in their seminal book The Economic Effects of Constitutions, noted economists Torsten Persson and Guido Tabellini examined the impact of electoral rules on government spending in 85 countries. Their research found that spending was almost six per cent of GDP lower in countries with majoritarian/plurality systems than in countries with PR election rules.

Reforming the way Canadians elect their political representatives is a serious matter and all costs and benefits must be weighed. Any analysis of potential electoral reform in Canada should note how public policies will be affected. The tendency of PR electoral systems to elect coalition governments drives up government spending—not because voters necessarily want such policies but because the power structure of the parliament has been realigned by changing the way politicians are elected.

At a time when spending is already on the rise across Canada, the fiscal consequences of electoral reform should not be taken lightly.