Alberta Premier Rachel Notley (above) has been making headlines recently as she travelled out East, giving speeches to investors in an attempt to encourage them to put money in the province’s weakened economy. She has also made some interesting policy statements during her travels.

On Monday, Sept. 28, speaking to the Montreal Chambre de Commerce, Premier Notley stated her government’s intention to phase out coal-fired electricity generation (currently 55 per cent of Alberta’s supply) in Alberta and move towards renewable energy. Specifically, she said that:

“We will be looking for a strategy to phase out the use of coal as quickly as we reasonably can—without imposing unnecessary price shocks on consumers; or risking security of supply; or unnecessarily stranding capital…We need a roadmap to renewable energy, and we need to get the economics of that conversion right.”

Fortunately for Alberta, Ontario can offer some painful examples of what can happen when you abandon coal for renewables. In the early 2000s, Ontario committed to the phase-out of all coal-fired generation, completing this in April 2014. And in 2009 Ontario embarked on its Green Energy Act (GEA), which subsidizes renewable electricity (wind, solar, etc.) by providing producers long-term prices at above market rates through a Feed-in-Tariff system.

The chart below shows what’s happened to Ontario’s electricity prices. The result is that electricity bills are rising much faster in Ontario than in the rest of Canada, particularly since 2009 when Ontario began its foray into renewables. 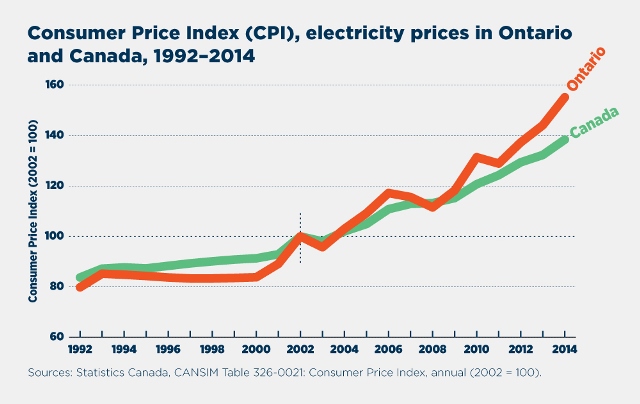 And while wind and solar account for only four per cent of Ontario’s electricity, they amount to 20 per cent of the average commodity cost. This is a high cost for little electricity.

As Ontario continues to forge ahead with renewables, the effects of higher electricity costs are being felt by the province’s business community. The Ontario Chamber of Commerce recently surveyed its members finding that one in 20 businesses expect to shut down in the next five year due to rising electricity prices, and the higher costs are also going to lead to the cancelling or delaying of investment in the coming years.

Indeed, Ontario’s Auditor General found that: “studies in other jurisdictions have shown that for each job created through renewable energy programs, about two to four jobs are often lost in other sectors of the economy because of higher electricity prices.”

And contrary to certain opinions, Alberta’s environmental record has been one of continuing improvement and high standards. Alberta’s air quality, which coal can have detrimental effects on, is rated as being “good” between 94 and 98 per cent of the time—and a “good” rating means that there are “no known harmful effects to soil, water, vegetation, animals, visibility, or human health.”

The prognosis may be bleak for Ontario, but it doesn’t have to be for Alberta. Alberta should consider proceeding cautiously when phasing out its coal plants and switching to renewables. If the disastrous experience in Ontario tells us anything, it’s that a shift to renewables will really just be a shift to higher electricity bills.