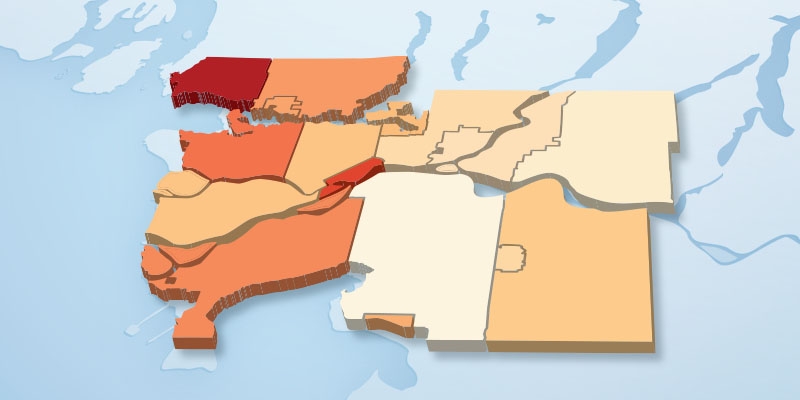 Municipal governments play an important role in the lives of British Columbians by providing important services and collecting taxes. But municipal finances do not receive the same degree of public scrutiny as the finances of senior governments. This can pose a problem for taxpayers and voters who want to understand how their municipal government performs, especially compared to other municipalities. To help create awareness and encourage debate, this report provides a summary analysis of important financial information for 17 of the 21 municipalities in Metro Vancouver, spanning the 10-year period from 2007 to 2016.

There is considerable variation in per-person spending among the 17 Metro Vancouver municipalities. West Vancouver, the highest spender in 2016 (at $2,583 per person), spends more than twice the amount spent by Surrey, the lowest spender (at $1,057 per person), and more than one-and-a-half times the regional average ($1,549 per person). But the large differences in per-person spending do not seem to be driven by population. For instance, the City of Vancouver has the largest population and is the third highest spender ($1,944 per person), while Surrey has the second largest population and is the lowest spender (17th). From 2007 to 2016, all 17 municipalities increased per-person spending, after inflation. But the growth in inflation-adjusted spending per person was faster in some municipalities than others. The District of Langley had the fastest growth (46.6%) and Port Coquitlam had the slowest (3.3%). The regional average was 21.3%.

When it comes to developer fees, which are essentially taxes levied on property developers, Surrey, Maple Ridge, Port Coquitlam, and the District of Langley all relied more heavily on this revenue source than other municipalities over the decade analyzed. However, a high reliance on developer fees can have adverse implications because, as research shows, in some markets such taxes can be passed on to homebuyers, leading to higher prices for new homes and possibly existing housing. This is a critical issue for Metro Vancouver, which already has high home prices relative to other Canadian regions.

For property taxes, another key revenue source, some municipalities rely more heavily on businesses, as opposed to residents. The City of Langley has the largest property tax share coming from businesses at 50.9% and West Vancouver has the lowest at 7.0% (the range for most municipalities is between 28.3% and 46.8%). However, imposing too heavy a property tax burden on businesses can have negative economic consequences since property tax rates can influence business decisions about whether or not to maintain operations, expand, or relocate. This is particularly important for Vancouver, which in many ways is the economic hub of the region. Yet the share of Vancouver’s property tax revenue coming from businesses (46.8%) is above both the regional average (40.3%) and the share found in Surrey (31.5%); the city also has among the highest ratios of business-to-residential property tax rates. For instance, Van-couver’s heavy industry tax ratio is almost five times that of Surrey, the next largest munici-pality by population.

All Metro Vancouver municipalities examined in this report are in a net financial assets position. These range from $107 per person in Surrey to $5,023 in Burnaby. Vancouver, unique in its ability to issue government debt on its own authority, also has the highest interest expenditure relative to its operating spending (3.2%). Provincial regulations that require balanced operating budgets and that limit debt accumulation play an important role in keeping municipal debt low.

View the Infographic - A Tale of Two Cities