The Sustainability of Health Care Spending in Canada 2017 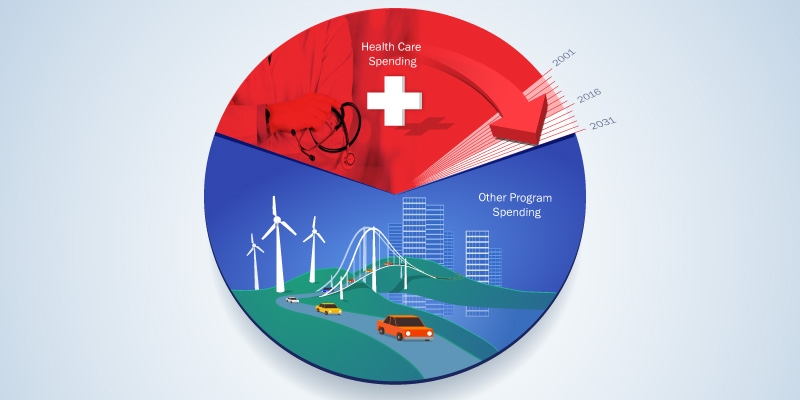 Health care is the single largest budget item for every province in Canada, ranging from 34.3 percent of total program spending in Quebec to 43.2 percent in Ontario in 2016. Any changes in the amount spent on health care can have a significant impact on a government’s fiscal balance (deficits or surpluses), the resources available for other programs such as education and social services, and/or tax competitiveness.

It is therefore vital that we routinely assess historical, current, and expected trends in health care spending in order to determine if such spending is sustainable.

While a number of indicators can help determine the sustainability of changes to health care spending, the most common and informative of these indicators is the share of program spending represented by health care and the ratio of health care spending relative to the size of the economy (GDP). An increase in the former may result in the crowding-out of other spending while an increase in the latter may require a change in the current tax system or deficits.

The pressing question today, however, is what can we reasonably expect to occur in the near future in the absence of any significant shift in government policy?

In order to answer this question, this paper presents the results of two scenarios based on a model for projecting health care spending in the future based on demographic factors (population growth and aging), inflation (general and health-specific inflation), and other factors (which may include factors related to government policy, income elasticity, developments in technology, etc.).

The first scenario (long-term trend model) is based on reasonable expectations of general inflation and demographic trends in the future, as well as assumptions regarding health-specific inflation, and other factors based on trends observed between 2001 and 2016. Under this scenario, health care spending is projected to grow at about 5.3 percent per annum on average between 2016 and 2031. As a result, health care spending is expected to consume a slightly larger portion of total program spending—growing from 40.1 percent in 2016 to 42.6 percent in 2031. The range of results for specific provinces is a low of 34.2 percent in Quebec to a high of 47.2 percent in British Columbia in 2031. As well, health spending in total is expected to grow from 7.3 percent of the economy in 2016 to 9.3 percent in 2031. Health care spending in four provinces (British Columbia, Prince Edward Island, Ontario and Nova Scotia) is projected to consume over 45 percent of total program spending—suggesting increases in spending along these lines may be unsustainable and carry some risk of crowding out other programs or requiring fiscal adjustments.

In the second scenario (short-term trend model), the assumptions regarding health-specific inflation and other factors are altered to reflect trends only between the shorter and more recent period between 2011 and 2016. Under this scenario, health care spending is projected to grow at about 2.9 percent per annum on average between 2016 and 2021. As a result, it is expected that health care spending will continue to represent about the same portion of total program spending—growing from 40.1 percent in 2016 to 40.5 percent in 2021. Relative to the size of the economy, health spending is again expected to remain roughly constant—decreasing marginally from 7.3 percent of the economy in 2016 to 7.0 percent of the economy in 2021. Under this scenario, there is less risk of crowding out other programs and requiring fiscal adjustments.

After years of increasing health care spending at an unsustainable pace, it seems as through provincial governments have started to reach their limits over the past 5 years—understanding that a continuation of such increases would result in either reductions in other spending, or higher taxation, higher deficits and debt, or some combination of these three.

Indeed, given expected inflationary and demographic pressures, if governments increase health care spending in the future in line with trends observed over the last 5 (rather than 15) years, the present ratio of health care spending to program spending and GDP may be preserved (at least in the near future). However, the continual presence of long wait times and low ratios of human and technological medical resources despite historically high levels of spending raise new questions about whether the public health care system will be able to deliver adequate services to patients without fundamentally altering its structure.