Both economic theory and empirical research suggest that high income tax rates distort incentives and impede economic growth. Some Canadians might believe—erroneously—that their income tax burden is relatively light because the top federal tax rate is quite competitive with other peer countries. However, in the 2013 Fraser Institute study The Economic Costs of Increased Marginal Tax Rates in Canada, my co-authors and I found that focusing merely on the top federal rate is misleading, because the Canadian provinces also impose relatively high tax rates. Once we adjust for this factor, we observe that our high income tax rates make Canada uncompetitive compared with many states south of the border.

When the public thinks about the burden of government taxation, they usually have in mind how much revenue—perhaps as a share of GDP—is transferred from households and businesses to the government. Although this is certainly an important metric, economists are also concerned with the economic damage done when the tax structure changes people’s behaviour. If a tax discourages individuals from engaging in a mutually beneficial transaction, then it has “hurt the economy” in the sense that an opportunity to make people better off has been missed. In the extreme, we can imagine a draconian tax that virtually wipes out a particular market; such a tax would yield little revenue (because there would little activity left to tax), but it would obviously be harmful to anyone who had previously bought or sold in the market.

Because individuals make decisions “on the margin,” economists focus on the marginal income tax rate that individuals face. In other words, the tax rate of their current income bracket is the relevant parameter that influences whether individuals will work longer hours or take more risk.

Now we see the potential downside to a “progressive” income tax, which imposes higher rates on higher income. Although the obvious appeal of such a system is that it concentrates taxation on those members of society who can most afford it, a huge drawback of progressive taxation is that it discourages economic activity more than does a tax system with more uniform or “flatter” rates.

Besides the textbook theory, we have empirical studies documenting that taxation really does matter. For example, in their seminal 2010 article “The Macroeconomic Effects of Tax Changes: Estimates Based on a New Measure of Fiscal Shocks,” Christina and David Romer studied several periods in US history and estimated that a tax increase of 1 percent of GDP reduces output by roughly 2 to 3 percent. In 1996, in the article “Taxation and Economic Growth,” Eric Engen and Jonathan Skinner reviewed more than 20 studies of the United States and other countries, and concluded that “a major tax reform reducing all marginal rates by 5 percentage points, and average tax rates by 2.5 percentage points, is predicted to increase long-term growth rates by between 0.2 and 0.3 percentage points.”

How Canada ranks against peer countries

In light of the significance of marginal income tax rates on economic behaviour, it is important to consider Canada’s standing against similar countries. The chart below combines national and sub-national personal income tax rates for the G7 countries plus Australia, which is often compared to Canada given their economic, cultural, and historical similarities. For Canada, Ontario’s provincial tax rate is used as a proxy for the provinces and for the United States, Michigan is used. 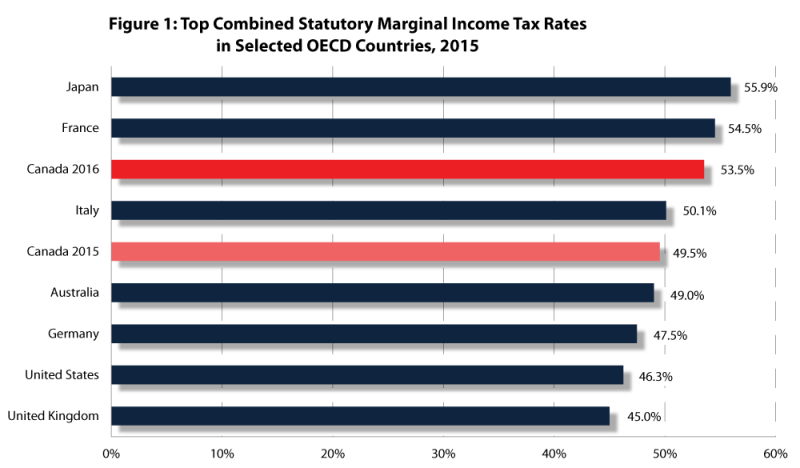 As the chart illustrates, as of 2015 Canada had a middle-of-the-road top marginal personal income tax rate compared to the rest of the G7 and Australia. Specifically, at 49.5 per cent, Canada’s rate was higher than the United Kingdom, the U.S., Germany and Australia, but lower than the top marginal tax rate in Japan, France and Italy.

It is important to understand the provincial variations in tax rates. The combined federal and provincial top tax rates provide a large one-two punch to take-home income for Canadians. In Nova Scotia, a whopping 21 per cent more is taken at the provincial level, yielding a combined top income tax rate of 54 per cent. Note that Quebec has the highest provincial tax rate, but the federal abatement means that the combined burden is lower in Quebec than in Ontario or Nova Scotia.

To be fair, we should acknowledge that in Canada, more governmental functions (especially education) are handled at the provincial level than is typical in other peer countries. Consequently, the Canadian pattern of relatively low federal tax rates coupled with relatively high provincial tax rates is not, by itself, problematic.

Another way of putting the matter is to consider British Columbia, which has the lowest combined top personal income tax rate of any province. Yet even though B.C. is the most competitive jurisdiction in Canada, out of 50 U.S. states, 42 have a lower combined income tax rate than B.C.

But wait—it’s worse. By merely comparing the (combined) top personal income tax rates, we are understating how much heavier the Canadian burden really is. This is because the top rate kicks in at a lower income threshold in Canadian provinces, compared to U.S. states. The Canadian provinces apply their top marginal income tax rates on people earning much lower incomes than in the U.S. For example, in Alberta the top income tax rate kicks in at $300,000 and above; in Ontario the threshold is $220,000; and for the other provinces the top tax rate applies to any income above $200,000. In contrast, the threshold is much higher in U.S. states. Many of the states have a top threshold (in Canadian dollars and for single filers) of about $550,000. Further, an admittedly “high tax” state like New York only applies its top rate to incomes above $1.4 million.

Simply put, the combined federal-provincial personal income tax burden on Canadians is higher in any province than it is in the overwhelming majority of U.S. states. Furthermore, the threshold at which these top rates are applied is much lower in Canada, meaning that the disparity in tax burdens is even larger than the rates alone would suggest.

Both economic theory and empirical analysis indicate that high marginal income tax rates distort behaviour in harmful ways and in particular reduce economic growth. Although a superficial consideration of income tax rates levied at the federal (or central) government level makes Canada appear competitive against other G7 countries, once we account for the relatively high burden of provincial income tax rates, Canada’s edge evaporates. Specifically, as of 2016, the combined federal and provincial tax rate in the lightest-taxed province of B.C. (at 47.7 per cent) was higher than the analogous figure for 42 of the 50 U.S. states. Furthermore, the income threshold at which the top rates apply is far lower in Canada than in the US, posing further problems for Canadian competitiveness.

Especially as the U.S. embarks on major tax reform under the new Trump administration—which may very well combine income tax rate reductions with other features—Canadian provinces and the federal government should consider measures to make their jurisdictions more tax competitive.