Is Ottawa shortchanging the provinces? Not even close

A look at the numbers, however, reveals the narrative about Ottawa shortchanging the provinces is false. In reality, federal transfers to the provinces have been increasing strongly and steadily over the past decade. In fact, after accounting for inflation and population changes, transfers are higher now than at any point in Canadian history.

Let’s pause to define “federal transfers.” All provinces receive payments, based on their population, to help fund health and social services. In addition, some provinces receive equalization payments if they are deemed unable to raise enough revenue to finance adequate public services.

Federal transfers are frequently a point of contention between the provinces and Ottawa, with provincial governments often claiming they don’t get enough money (without defining what “enough” is) and that Ottawa is therefore to blame for their fiscal problems.

Consider developments over the past decade. Federal transfers to the provinces (and territories) have increased by 62.3 per cent since 2005/06, climbing above $68 billion in 2015/16. This rate of increase greatly outpaced inflation and population growth, which together grew by 31.6 per cent.

Consequently, federal transfers to the provinces are higher today than ever before, on an inflation-adjusted per person basis (see chart), with a projected cost of $1,897 per Canadian this fiscal year—far more than was the case a decade ago ($1,535). 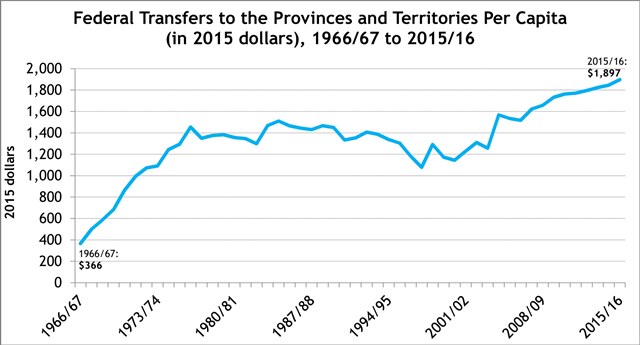 Other metrics similarly show that federal transfers are on the rise. For example, in 2005/06, major transfers represented 14.8 per cent of all provincial revenue. Since then, that share has climbed and will reach 17.3 per cent this year, the highest level in recent history.

In Ontario, the provincial government has been particularly vocal in recent years about being “shortchanged” by Ottawa. Following the 2014 budget, Ontario’s finance minister said the federal government had delivered a “kick in the teeth” by making “massive cuts” to the province.
In reality, however, federal transfers to Ontario have increased at a much faster rate than transfers to almost all other provinces. Between 2005/06 and 2015/16, federal transfers to Ontario increased by a whopping 87.8 per cent, thanks largely to the injection of more than $14 billion in cumulative equalization dollars to the provincial treasury since Ontario became a “have-not” province in 2009/10.
In 2005/06, Ontario received 26.0 per cent of all major federal transfers. By 2015/16, that share will be 30.1 per cent. In other words, even as the total federal transfer “pie” has grown, Ontario’s share of the pie has increased.

There will always be a temptation for provincial governments to cry poor to Ottawa, and claim they should get more money. After all, complaining about federal transfers is easier than restraining spending or implementing unpopular and economically harmful tax increases to generate own-source revenue.

At present, however, these claims have little merit. Provincial governments, including Ontario, should look inward at their own policy choices rather than blame inadequate transfers from Ottawa for the fiscal challenges they face.