Exploration is an essential part of mining and a lot of it is needed. To put this into perspective, one rough evaluation holds that “[i]t sometimes… takes 500–1,000 grassroots exploration projects to identify 100 targets for advanced exploration, which in turn lead to 10 development projects, [one] of which becomes a profitable mine.”

But the permitting process for exploration may be acting as a deterrent to investment. Specifically, we consistently receive comments in our annual survey of mining company executives that the process for receiving exploration permits has become more onerous and longer over time.

Policies that are uncompetitive and increase the time, costs, and risks associated with exploration could discourage investment in exploration endeavours, thereby diminishing the chances that a viable deposit will be found and eventually developed into a producing mine.

As part of the 2015 mining survey, we added supplementary questions for Canadian respondents to assess how long explorers are waiting, as well as the transparency and (un)certainty of the permitting process are either encouraging or discouraging investment.

Below are some of the results related to the length of time it is taking explorers to receive their necessary permits.

In particular, explorers in Nunavut, Northwest Territories, and Ontario were waiting a long time. More than one out of every three explorers in those provinces and territories were waiting more than seven months just to receive the necessary permits to conduct exploration activities. British Columbia and Quebec, which along with Ontario attracted over 60 per cent of exploration spending in Canada in 2014, also have some room for improvement. In Quebec, 24 per cent of respondents reported waiting seven months or more for permits. This number was 19 per cent in British Columbia. 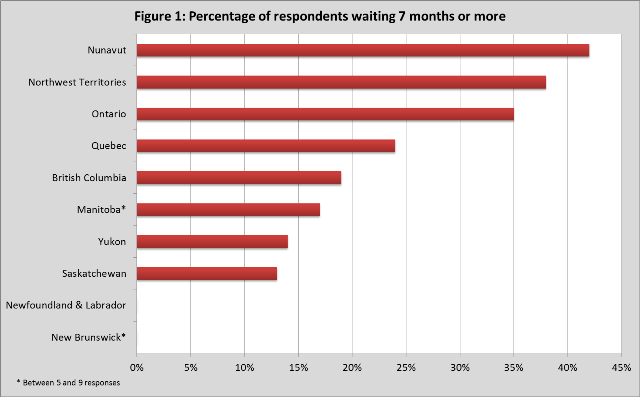 Also of concern is the number of respondents indicating that wait times for receiving permits have lengthened over the past decade. In five out of 10 provinces and territories included, 50 percent of respondents or more said that the time to permit approval had lengthened. 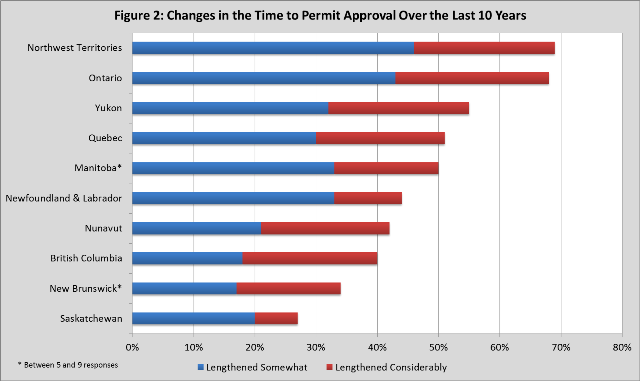 The key takeaway is that governments have some work to do. Explorers are having to wait a long time to do the necessary work that will help unearth Canada’s resource potential. And the situation appears to be getting worse for many. Policy reform in this area should be considered