Oil production will continue to grow without pipelines

Will Canada ever get another major pipeline to transport its oil to market? These days this is a pertinent question without an easy yes or no answer. Indeed, there’s currently political opposition from politicians of all stripes to every major pipeline proposal.

There’s British Columbia Premier Christy Clark’s opposition to the Trans Mountain pipeline expansion; U.S. President Barack Obama, after years of dithering on the Keystone XL pipeline, finally rejected it at the end of 2015; Prime Minister Justin Trudeau has instructed his transportation minister to implement a moratorium on crude oil tankers off of B.C.’s north coast, likely ending the prospects of constructing the Northern Gateway pipeline; and most recently mayors from the Montreal region announced their opposition to Energy East.

The prospects for pipelines may look dim, but how much will the absence of major new pipelines affect future Canadian energy development?

In the report, the NEB assumes that none of the four major pipeline proposals mentioned above are constructed and that Enbridge Mainline expansions and crude-by-rail are the only options to increase export capacity.

As the NEB explains, since oil-by-rail is a more costly form of transportation it can lead to lower prices being received by Canadian producers, resulting in slower growth for Canadian crude oil production. However, the consequences in terms of production might not be as large as many may think. As seen in the graph below, in a scenario where none of the current four major pipeline proposals are constructed, western Canadian crude oil production is projected to be about eight per cent smaller—or instead of producing just over six million barrels a day in 2040, Canada would produce just over 5.5 million barrels per day. 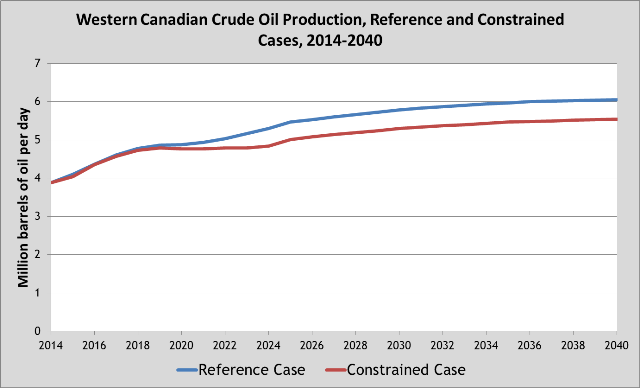 Also, in terms of transporting oil in the safest, most environmentally friendly way, there is no alternative to pipelines. In a recent study, we compared the safety of pipelines and rail for moving oil and gas, taking into consideration the amount of product each transportation method uses, finding that rail is more likely to experience an occurrence (accidents or incidents) when compared to pipelines—a similar finding to the Manhattan Institute, which conducted a similar analysis using U.S. data.

While not building pipelines will not be a disaster in terms of stymieing oil production growth, one thing is clear; for Canada to realize its true energy potential and maximal value of its resources, pipelines will be necessary.