What would Chrétien’s budget rules have meant for Trudeau: Part 2 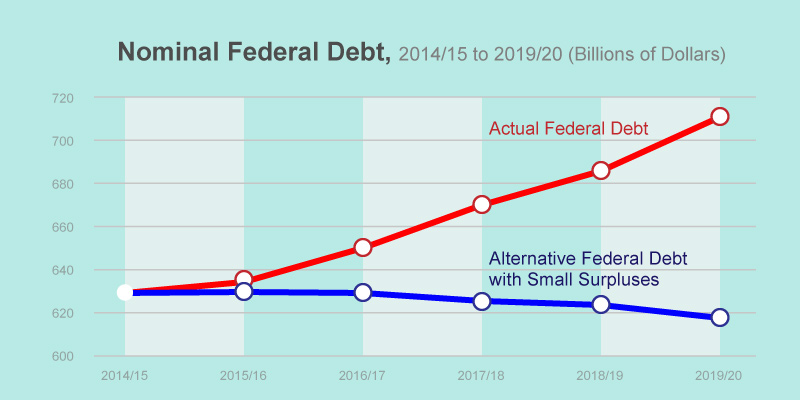 After successive years of higher-than-promised federal deficits and record levels of per-person federal spending, the Trudeau government now finds itself less prepared to respond to the COVID-19 pandemic. This blog post estimates where federal finances could have been prior to the recession had the Trudeau government followed the fiscal rules used by the Chrétien Liberals in the mid-90s and early 2000s.

As mentioned in Part 1 of this blog series, the Chrétien Liberals demonstrated fiscal prudence by balancing the budget and running annual surpluses to bring down the absolute level of debt during their tenure. The resulting string of surpluses brought an 18.7 per cent reduction in nominal federal debt (total assets minus total liabilities) between 1996-97 and 2007-08 and left the country more financially suited to deal with the fallout of the 2008-09 global recession.

In contrast, the Trudeau government has run five consecutive deficits since taking office in 2015 and is expected to have accumulated approximately $84.3 billion in federal debt—$713.2 billion total—by the end of 2019-20.

But if the Trudeau government had followed the rules of the Chrétien government and required small annual surpluses during the last four-and-a-half years, our debt situation and thus our preparedness for the current recession would look very different today.

Consider where federal finances would have been—potentially—had the new Trudeau government maintained the small surpluses expected in the Budget 2015. Under this scenario, the federal government would have recorded annual surpluses averaging $2.6 billion from 2015-16 to 2019-20. This is actually less strict than the Chrétien rules that required surpluses ranging from $3 billion to $4 billion, through the use of contingency reserves and additional economic prudence measures.

The graph below shows the string of small surpluses would have led to an $11.0 billion reduction in federal debt—rather than an $84.3 billion increase—relative to the level that existed when the government first took office. Current projections estimate federal debt will reach $713.2 billion in 2019-20 while the alternative scenario suggests federal debt would have been $617.9 billion if fiscal prudence was a higher priority, as it was under the Chrétien government. Put differently, the Trudeau government has accumulated nearly $100 billion more in federal debt than it would have by running small surpluses when the economy was growing.

The small decline in nominal debt levels associated with running successive surpluses would also mean a declining federal debt-to-GDP ratio. Had the federal government followed this approach, its debt as a share of the economy in 2019-20 would have been 26.8 per cent rather than 31.0 per cent.

Moreover, this plan would only have required modest spending restraint. The 2015 Budget included a nominal program spending increase of $48.0 billion, or 18.9 per cent, by 2019-20 while running small surpluses. Comparatively, the Trudeau government has increased nominal program spending by $84.5 billion, or 33.0 per cent. But the Trudeau government would not have had to even restrain spending to the same extent as Budget 2015 to achieve the same surpluses.

Simply put, had the federal government demonstrated more fiscal prudence in recent years, we would be in a much better financial situation entering this recession. The Trudeau government could have followed the approach of the Chrétien Liberals by imposing discipline on its spending, taxing, and borrowing decisions and run a string of surpluses while the economy was growing. This plan would have reduced federal debt, debt-to-GDP, and left us more financially prepared to respond to the current recession.